Forum to discuss everything that is Tigers related

So the second post by me, both in the catering section. My priority isn't just beer and pies, BUT the occasional pint of beer does make a very nice addition to watching the match.
Is there going to be any change this year to the catering or will it be the same old?
I think the club could get so much more money in sales if they did something about the awful service. I am happy to spend my money at Welford Road, if only there was someone there to take it!

The Saints post about the changes they are making to their catering sound like on this point they are listening to their supporters.

I haven't heard, seen, read anything about the catering for the new season.

Still, we are looking forward to the new season. The season tickets have arrived and all dates that can be, have been put in the family calendar :)
Top

Reactions on facebook suggest the club have managed to excel themselves and make things even worse than before. It's beyond a joke and is a silver lining in me relinquishing my ST this season.
You're either in or you're out
Top

For the very first time in 20 years did I see 2 people having a real go at the staff over the new system with none acceptance of "glasses" at the bar. A supervisor watched girls handle the first very angry person and I have to say although I agree with him, he was wrong to take it out on the girl who did really well. The 2nd had a go at the supervisor who said it was impossible to programme the till to accept returns of glasses without slowing up service. The cross person in this case said he was in IT and that he could do it very easily. This system is going to cause problems in our small outlet areas and I understand there were long queues at the one returns area in the south stand. The supervisor in the final whistle told me to put my full pint glass in the empty glass so I had 2 in one rather than fight my way to the returns station.

Whilst I am having a moan - why are there not more shelves on the walls of the bars, and what has happened to the barrels in the Final Whistle - it is not a bar I use very often so I don't know how long they have been gone.
Hehehehehehehehe
Top 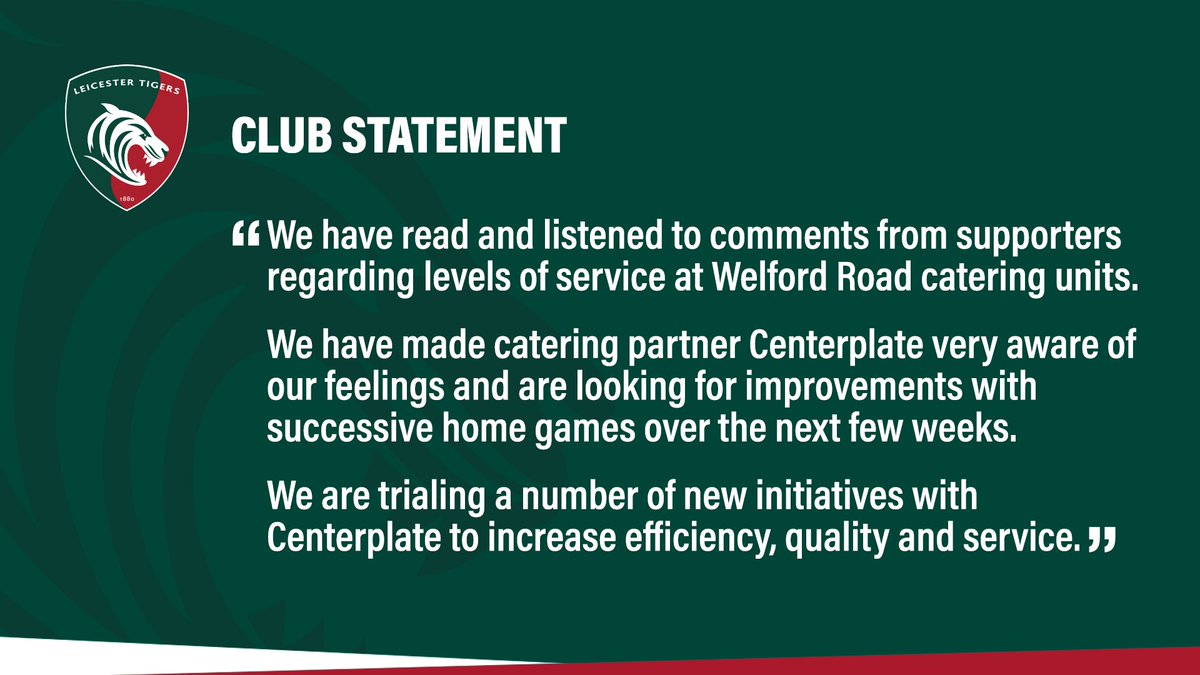 Finally some word from the club on the quality of catering outlets. Thoughts everyone?
Top

Thank you club for your statement, I look forward to see the results of your improvements
Hehehehehehehehe
Top

Slow service
Taking the wrong order
Not knowing lager from Guinness
Unable to use a bottle opener
Charging the wrong amount
Changed procedure means you can't swap out your used glass for a fresh one at the bar
Not enough return points
New app to order not working, not available to collect

The statement is meaningless. Such statements have been made before. I think a new brush (read contractor) can be the only way forward. The current ones have been in place for many years. This is not a new issue.
You're either in or you're out
Top

trendylfj wrote: ↑
Mon Aug 21, 2017 5:31 pm
Thank you club for your statement, I look forward to see the results of your improvements

Yep. And I look forward to the day my son cleans his room at the first time of asking.
You're either in or you're out
Top

I have to agree with many others the bars are pathetic !!
Staff have no clue how to poor pints ,what to charge and why do they have pints pre pulled and never use them ?
The pizza and hot drinks stand had no pizzas at half time nor any Bovril.
All in all for a club which is so good in so many areas how can they continue to get this so wrong !!
Please please will somebody listen.
Top

I have just come back from tonight's game and we had fun, there was some good rugby, my son got his 13th Birthday mentioned at half time, the first pint in the Try Line ordered by the new app was fine.

At half time we went to the bar in the Robin Hood stand. They were still taking empty pint cups back and offsetting the cost against the new pint. I thought they weren't doing that any more?

Anyhoo ordered a 2 pinter and a 1 pinter. After being asked if that meant I wanted three pints I explained that I wanted a 2 pint jug, a 1 pint glass. I was then told that they ran put of 2 pint jugs and would 2 x 1 pints be OK in lieu of the 2 pinter. I then got given a sum total of 2 pints. I am not kidding when I say that it took about 4 minutes to explain that I wanted in total 3 pints of beer. The guy serving should not have been on the till.

I then saw some sort of manage scamper off round the bar collecting used two pinters and then give them a rinse at the back in a hand basin and then give them back to be reused!!!
Now although I would happily drink from most of mates pint glasses, there might be one or two I would shy away from. I would want the option.

I love coming to the tigers.

As recommended I downloaded the app placed an order for my cider and phone in hand went to the first bar I could find. Sorry sir the only place you can get this is the final whistle. Not handy when you're in Mattioili Wooods
Top

Be warned, the catering at Tigers remains a world leader in :censored: catering. Great game tonight but the service was, as ever, shocking.
Ordered one pie, staff member summarised my order completely wrongly. I clarified, he said ok got it then served me completely the wrong pie. Only found out when back at my seat.
Won't even bother with the SwipeStation app anymore. It's dropped my password and wouldn't let me reset it. I'm now worried that I shared my debit card details with that piece of junk.
I'm boycotting Tigers catering from here on in.
Top

Upper Holland & Barrett as shambolic as ever yesterday.

Unmanageable queues, even when there were more staff than customers it took forever to get a beer.

Untrained and frankly, terrified youngsters behind the bars.

People being over-charged for recyclable glasses.

Tigers "statement' was yet again platitudes to try and fool us into thinking they care......
If winning isn't everything, why do they bother keeping score?
Top

ABC bar at Glos game. A drink was spilled early on. it was on the shelf mainly rather than thefloor and it was spreading. Very few customers in the bar. The bloke who spilled the pint asked for a cloth or something to mop up with. Couldn't be done "We're on till training". Bloke asks for a supervisor: blank looks; nobbles a woman in a grey suit who happens to be walking v quickly through the bar, turns out to be connected and who fetches a roll of blue paper and mops up.
Spillage of beer in a bar!! Unheard of; which is presumably why the staff were at a complete loss as to know what was expected or what to do.
Omnia dicta fortiora si dicta Latina
Top

There is a really simple solution and I don't understand why those of you moaning don't do it. Don't use the service. If you boycott it for 1 or 2 games, there WILL be changes made.

It really isn't that difficult and I'm sure you can go 2 hours without food and drink. If you can't, then I'd recommend seeing someone at AA.
Top
Post Reply
189 posts

Users browsing this forum: No registered users and 2 guests